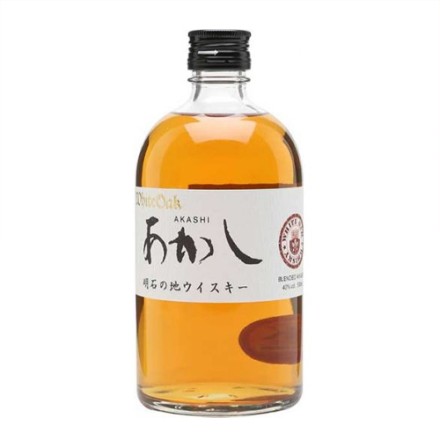 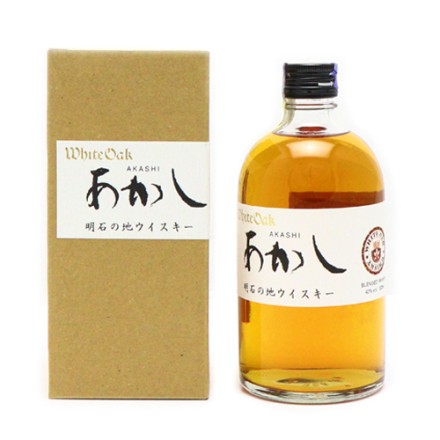 
Akashi White Oak Blended Whisky, is a blend, not a single malt. White Oak is only active for two months per year, so their output is very limited. It has matured some 5 to 6 years.

the only whisky in the world that is made by a Toji (grand-master in the art of sake making) by implementing sake-making methodologies into the whisky making process. The distil pot used is smaller than those used by both Scottish and other Japanese distilleries, which in turn, decreases the levels of fusel alcohol. As a result, Akashi whisky does not require as long of an ageing process, while its new make is smooth and delicate.

White Oak Akashi was founded in 1888 on the site of Eigashima in the city of Akashi. White Oak distillery was the first in Japan to obtain the license of distilled spirits in 1919 and according to legend would consequently be the first to distil whisky. Production remained traditional and reserved for the Japanese market until 1984 with the construction of a new distillery specially dedicated to the distillation of whisky. Located near the sea, and the city of Kobe, the distillery is enjoying a mild and stable climate. Forbes Magazine: “Top 10 Japanese Whiskies to Try Now. “White Oak Akashi – an easy to drink blend with chocolate, honey, and fruit flavours.”

The White Oak Distillery is located in the city of Akashi in the Hyogo prefecture. This distillery received its distillery license in 1919 but only really began using it for whisky in 1984; prior to that it mainly (and still) was used for saké and barley shochu production. Distilling whisky only one to two months a year, production is very small. This is a non-age statement blended whisky, but it is likely around 3 years old and is aged in ex-bourbon before finishing in ex-sherry casks. •

The Macallan 12yo Double Cask 700ml

This website requires you to be 21 years of age or older as Indonesia's law only allows sales of alcohol to people over 21.